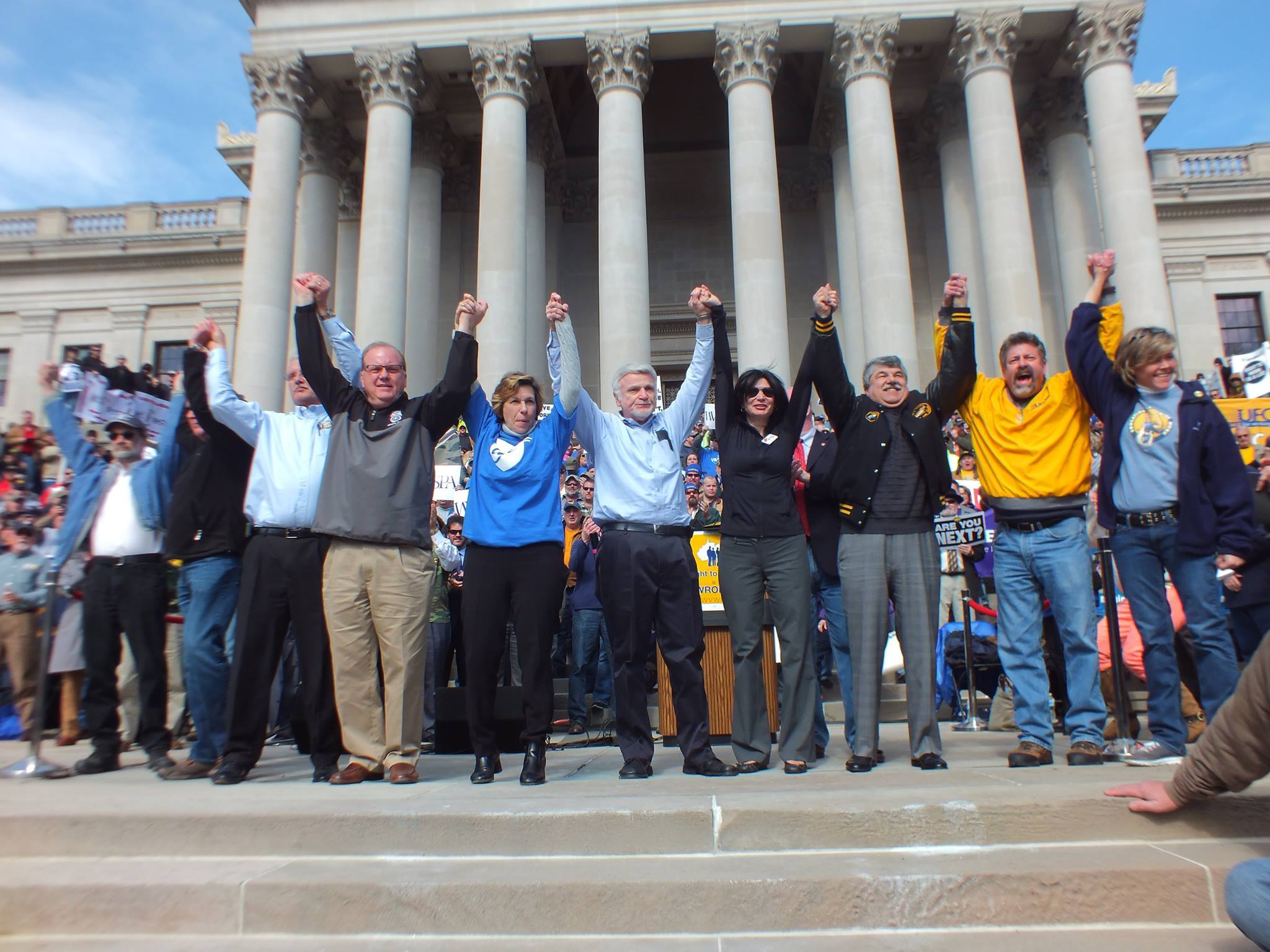 This year has been packed with collective bargaining and growth successes, community events and political victories. As we look forward to the New Year ahead, here’s a quick trip through the 2015 highlights.

Minimum Wage Increases Effective January 1, 2015 For West Virginia
Montgomery and Prince George’s County in Maryland increased minimum wage in October.  The State of Maryland and District of Columbia’s wages went up in July!

Your Union Protects Your Rights as Safeway-Albertsons Merger Becomes Final
On Friday, January 30, the merger became final. Due to the strength of Local Union, and the protections of Article 1 of our contract with Safeway, we maintained our jobs, pay, benefits, seniority, and collective bargaining agreement with the newly merged company.

In 1993, President Bill Clinton signed the Family and Medical Leave Act. The law requires most employers of 50 or more workers to grant up to 12 weeks of unpaid leave for a family or medical emergency. Read more about FMLA on our website, you’ll be glad you did!

Mountaineer Workers Rising Rally
Thousands of people (some reported 6,000!) came to the West Virginia Capitol building in Charleston on March 7, 2015 to hear from the leaders of

America’s most prominent labor unions at a rally to protest against the agenda of the new Republican majority in the Legislature. Of course Local 400 was present in their gold glory accompanied by our drumming and noise-making union brothers and sisters from UFCW Local 23.

Kroger Members Fight Back Against Portsmouth Closing
It was bad enough that Kroger
closed store #538 on High Street on April 11,(page but to add insult to injury, Kroger did not offer workers jobs at the nearby Kroger #542, also in Portsmouth — instead, the company said they would have to work at Kroger #555 in Yorktown, Va., a 50-mile round trip commute.

The reason? Kroger #542 is a so-called “Marketplace” store, which the company is trying to run on a non-union basis. Check out the
news coverage from WAVY.

CVS Members Ratify New Contract
On May 17 Local 400 members working as pharmacists at CVS unanimously ratified a new collective bargaining agreement that raises their pay, maintains their protections, and strengthens their workplace environment in other ways.
Read more!

Bestway Falls Church Workers Ratify First Contract
Culminating a long, challenging fight, Local 400 members working at Bestway in Falls Church, VA. ratified their first collective bargaining agreement May 14! Despite the countless obstacles, the workers never backed down. They earned a fair contract and those who went on strike were awarded damages through an NLRB agreement and those no longer employed have the right to return to work.

Montgomery County Enacts Paid Sick Leave Law
The legislation provides every person working in the county at least one hour of paid leave for every 30 hours of work, up to 56 hours of paid leave per year. The new law takes effect October 1, 2016 and will benefit an estimated 90,000 people. Paid leave can be taken if the worker or the member of the worker’s family suffers from an injury or illness or is the victim of domestic violence. This follows passage of a similar law in D.C. in 2014.

Healthcare Services Workers Vote Union Yes!
Certified Nursing Assistants (CNAs) and dietary workers at Elizabeth Adam Crump nursing home have been Local 400 members for many years. But that hasn’t been the case for the laundry, floor care and housekeeping associates working alongside them. As employees of contractor hired by Crump — Healthcare Services — the laundry, floor care and housekeeping workers didn’t have union representation. But they do now. On August 20, the Healthcare services employees voted union yes!

Local 400 Member Makes History
Local 400 member Yves Gomes (pictured in blue), a pharmacy technician who works at Safeway, made history when he became the first undocumented immigrant and youngest person ever elected to the Executive Board of the Asian Pacific American Labor Alliance, AFL-CIO (APALA).

Members Rally for Worker Assaulted by Manager at Bestway Mt. Vernon
Local 400 members held a series of rallies in front of the Mt. Vernon store in support of a fellow member who was physically assaulted by his manager after he was told to take expired meat out of the trash, clean it, repackage it and put it back on the shelf to sell. The worker wasn’t going to put the health and safety of his customers in danger. So instead he took out his camera phone and recorded the managers behavior.

Kaiser Members Ratify National Agreement
Local 400 health care professionals working at Kaiser ratified a national collective bargaining agreement that increases their wages, and sets standards to improve the quality and safety of health care. “We look forward to working with the leadership of Kaiser in administering this national contract,” said Local 400 Secretary-Treasurer Lavoris “Mikki” Harris. “This is a sound agreement that paves the way for our local bargaining with Kaiser Mid-Atlantic that will take place in 2020. “What’s been most positive about this process is how it has galvanized member activism,” Harris said. To read more about the key provisions of the three-year national agreement look for the article in the Union Leader.

UFCW Local 400 Reaches Agreement to Represent Employees of Maryland Medical Marijuana Provider
Local 400 has reached an agreement with Bethesda Biomedical, Inc. to represent medical marijuana workers in Maryland once the state approves the company’s license to operate. The agreement guarantees high wages, healthcare, a pension and other benefits to future employees of Bethesda Biomedical. The contract covers pharmacists and pharmacy technicians, cultivators and laboratory technicians on both the manufacturing and retail sides of the business.

Edwards, Rasoul Say They Will Push General Assembly for Minimum Wage Increase in Virginia
Unfortunately, not all of the candidates who won in the elections in Virginia last week are friends of working people. We did work hard to help re-elect John Edwards and Sam Rasoul in Roanoke, who promised to introduce legislation to raise the minimum wage.
Check out the report on it, featuring Kroger member Kristy Key! We will continue to fight for $15 in every state!

For The First Time Ever, IKEA Employees Go On Strike in US
On November 16, 2015 employees at the Stoughton, Massachusetts IKEA went on strike, shutting down normal store operations in an effort to improve the lives of hard-working IKEA workers and their families. The striking employees are the first unionized retail workers at the U.S. IKEA store, and are taking this action in response to IKEA USA’s refusal to recognize their union and enter into contract negotiations. Read more on
the UFCW Blog.