This past Friday, Local 400 members working at Metropolitan Poultry ratified a four-year collective bargaining agreement that maintains their health and welfare benefits and retirement security, while increasing their total compensation by an average of $1.35/hour over the life of the contract. In the negotiations, the Local 400 bargaining committee defeated all proposed concessions. Instead they added language to improve holidays for part-time employees, sick leave and funeral leave, with a longevity bonus for those with 15 or more years of service. Local 400 members also achieved successorship language, which states if the company decides to sell to new owners, the new owners must negotiate with the union. 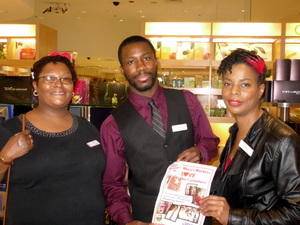 Local 400 Members from Macy’s at Metro Center pose for a picture to show their love and appreciation for their customers on Valentine’s Day last year. Members handed out handbills to customers thanking them for shopping union during the holiday; photo by Karlyn Williams

On Sunday, Macy’s members ratified a five-year collective bargaining agreement that improves the lives of 686 members working at stores in Washington, D.C., and Maryland. The agreement raises their living standards and protects their health and welfare benefits. As with Metropolitan, Local 400 members defeated all concessions proposed by management. Of special note, Local 400 members succeeded in inserting language into the contract requiring management to properly train all employees on how to use the new scheduling program system, My Schedule Plus, so they can benefit from it when Macy’s implements “paid time off” in hourly increments effective with the new Paid Time Off (PTO) program in 2015.

“It’s a tribute to our members’ involvement and activism that we were able to negotiate such strong collective bargaining agreements with Macy’s and Metropolitan Poultry,” said Local 400 President Mark P. Federici. “The negotiations were very challenging and protracted, but because of our members’ dedication, their living standards and working conditions will improve, and their health and retirement security continue to be protected.”