Civil rights, community and labor groups on June 10 marked the 50th anniversary of the historic 1963 “Bloody Monday” civil rights protest march in Alabama. Hundreds gathered at Bibleway Cathedral in Danville, VA to take part in the recreation of the historic event. Bibleway’s Bishop Lawrence Campbell, who attended the original march 50 years ago with his wife, sported UFCW gold at the event. “We march to remember that infamous night and to learn from the past and improve our future,” said Campbell. The 1963 marchers were protesting segregation in all aspects of public life, from schools to lunch counters and jobs denied to black citizens. Many were arrested, and others tried to run but were cornered in an alley by police armed with fire hoses and clubs. During the June 10 reenactment, 300 people — in rows of six, escorted by police cars — walked 1.5 miles to the 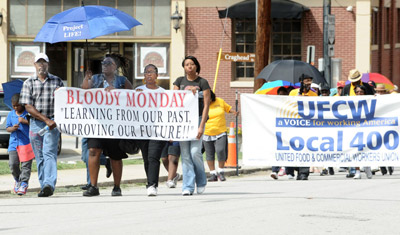 Municipal Building’s steps, singing, chanting, and encouraging each other to keep pushing on when the pace slowed. “I was very pleased and proud with how many young people attended this event, most of whom were not born during the days of segregation,” said Campbell. “Having events like this serves as a reminder of the tragedies and struggles throughout history and helps them realize the price that has been paid to now have those integrated privileges.” – photos by: Steven Mantilla/Danville Register & Bee