From Union City–Tensions were high at the Wilson Building yesterday as over 100 activists packed a hearing on the Large Retail Accountability Act (LRAA). The Act, which would require big box stores in DC to hire local residents and pay workers the DC living wage of 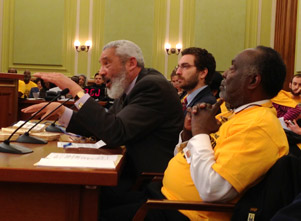 $12.45/hour, spurred big box stores to mount a “grass roots” campaign to turn out residents against the bill (“DC COPE Report: ‘Phony’ Community Group Takes Aim at DC Living Wage Bill,” UC 3/14/2013), but they were heavily outnumbered by the bill’s supporters. City Councilmember Vincent Orange, Chair of the Committee on Business, Consumer and Regulatory Affairs, noted that while retailers had contacted him privately to express their concerns with the legislation, none had signed up to testify, suggesting that they’re not willing to take a stand in public. And when DC Chamber of Commerce CEO Barbara Lang called the District “business hating,” snickers of disbelief broke out in the crowd.  “The District of Columbia needs corporations that respect their workers” said Metro Council President Jos Williams, testifying in favor of the bill. The LRAA “is a standard that should be set by the District of Columbia and is certainly one which billion dollar corporations can and should meet.” – photo: (L-R) Reverend Graylan Hagler (Plymouth Congregational), Ari Weisbard (DC Employment Justice Center) and Metro Council President Jos Williams testify in support of the LRAA; report/photo by Julia Kann