UFCW Local 400 members standing in solidarity with Walmart workers as they walk out on the job Nov. 19, 2012. This is one of many events happening throughout the country leading up to Black Friday. Photo by Bill Burke.

As Black Friday Approaches, Walmart Strikes Spread to Metro Area: Fast-spreading Walmart strikes hit the DC metro area Monday afternoon as workers walked out of a Walmart in Landover Hills, Md (video). Surrounded by more than 100 chanting supporters and families from UFCW Local 400, DC Jobs with Justice, and other local community groups, nearly a dozen Walmart workers faced-off with store management in the store’s parking lot, where Christine Bennett choked back tears as she described the abusive working conditions that prompted her to walk out on strike. Cindy, another Walmart worker, who helped start OUR Walmart (Organization United for Respect at Walmart), the group organizing the strikes, said that “We are changing Walmart across the country.” Activists plan solidarity actions Thursday evening and Friday morning. “I’m here in solidarity because you built Maryland,” said Maryland Senator Roger Manno, who joined Maryland Delegate Jolene Ivey and Prince George’s County NAACP President Bob Ross in marching with the strikers. Offering words of solidarity from the faith community, Reverend Edwin Jones of Living Faith Baptist Church of reminded the crowd “we will be back as many times as it requires of us.”   To watch the video of the event visit RespectDC’s YouTube channel.

For those of you in the DMV for the week, the big day is this coming Friday, Black Friday, November 23rd. We will be meeting at 7:30am at UFCW Local 400 — 4301 Garden City Drive, Landover, MD — across the street from the New Carrolton Metro station. 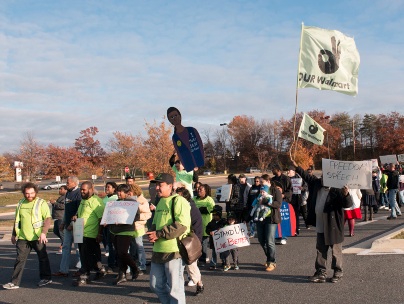 We’ll have breakfast, get on buses, and head out to support striking workers at several stores. We will be back by noon and lunch will be provided.

Click here to sign up.  This year, Walmart starts their Black Friday sales at 8pm on Thursday, Thanksgiving Day, November 22, and some workers will begin their strikes that evening. A group of Thursday-night supporters will meet at Local 400 at 7pm to get on buses and go do fun, high energy, quick support actions at a number of stores. We will be done by midnight.   Spread the word and emailorganizer@respectdc.org with any questions or if you need transportation help. Walmart is taking notice of us, the media is watching, now is the time change Walmart and change the economy. Don’t miss it. – some reporting from Union City, photos by Bill Burke/Page One