From Union City—Hundreds – perhaps thousands – of labor activists hit the doors, polls and phones throughout the metro Washington area yesterday to get out the working family vote for labor-endorsed candidates and ballot initiatives. Union City’s Chris Garlock and Julia Kann caught up with some of 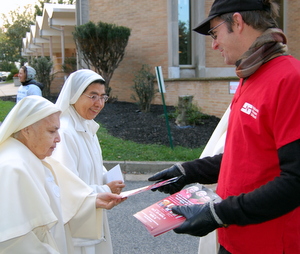 the volunteers over the course of a long Election Day…

At 7am on Election Day Stephen Frum (right), a nurse in Washington Hospital Center’s burn unit and a member of National Nurses United, is bundled up with a scarf and gloves while sporting his NNU red scrubs. “This election is so important, not just because of the top of the ticket, but because of legislation we’re working on in the District to increase nurse ratios for patient safety,” Frum says, as he passes out campaign literature to voters at DC Precinct 138 in the Capital MemorialAdventist Church in Northwest DC. 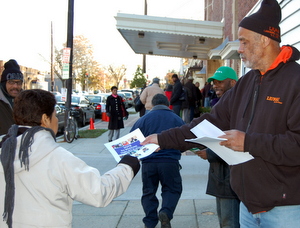 “I’ve been retired for 15 years but I always come out to help during elections,” Thomas Peoples (left) says as voters line up at 8am outside the Precinct 57 in Northwest DC. A member of Laborer’s Local 657, Peoples says turnout has been good; “A lot of people are coming out to vote today. [Pollwatching] is easy, compared to having to work on a construction site in the numbing cold.” 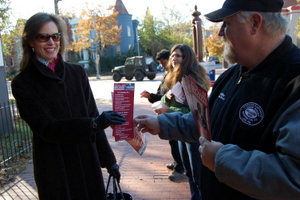 “I really hopeQuestion 7 (the pro-gaming referendum in Maryland) passes,” Cement Masons Local 891 Apprenticeship Director Jim Miller (right) says, as he and Local 891 member Carlos Jimenez distribute literature at DC Precinct 85 in Northeast Washington at 9am. “That’s a lot of jobs at stake. We used to have 65 apprentices and are down to two dozen now.” 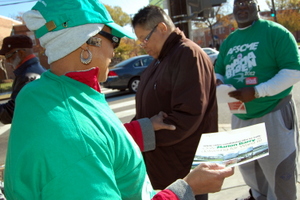 Down in Southeast, outside Precinct 126 at WB Patterson Elementary, the sun has warmed things up by 10am, and AFSCME Council 20 political chair Andre Lee is taking off his jacket, the better to showcase his AFSCME green campaign t-shirt. Along with retired member Gwen Jones and volunteer Anthony Hood, Lee holds court at the busy corner, with every voter stopping to chat with him about AFSCME’s endorsements and about the prospects for President Obama’s re-election. “Hey Trayon!” Lee hollers at a passing car and moments later School Board candidate Trayon “Tray” White comes over to join the festivities, glad-handing volunteers and voters alike. “We’ve got over 100 volunteers covering Wards 7 and 8,” says Lee, “and we’ll be back out here for the special At-Large election in March.” 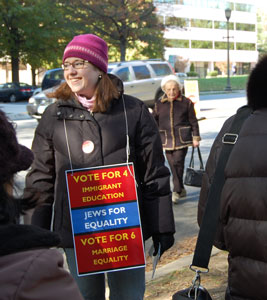 The line to vote at the Friendship Heights Village Center in Chevy Chase stretches down the block by noon, with volunteers from Jews United for Justice urging votes for Maryland question 6 and 4 on marriage equality and in-state tuition for immigrant youth or the “Maryland Dream Act.” Most voters were familiar and supportive of the same-sex marriage referenda, says JUFJ Organizer Sarah Brammer-Shlay. “A lot aren’t as aware of the Dream Act but once we explain it they seem supportive.” 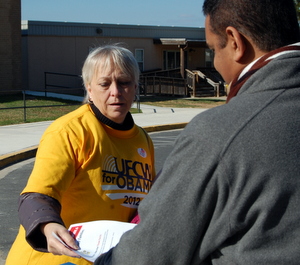 weeks of leave earlier this fall to do labor GOTV in Ohio but she’s back out again at midday at the Neelsville Middle School in Germantown, MD, urging voters “Support our police officers, vote against Question B.” “It’s just so outrageous,” Fitzmeyer said, “the amount of money that [Montgomery County Executive Ike] Leggett has put into trying to ram this anti-collective bargaining law through. Especially when they’ve said they don’t have any money to give us raises for the last five years.” Fitzmeyer was especially shocked “when they put up pro-Question B signs in front of the county libraries, which are supposed to be non-partisan places.”

Prince George’s County school workers “have had to do more with less,” Association of Supervisory and Administrative School Personnel (ASASP) President Shirley Adams (left, in green) 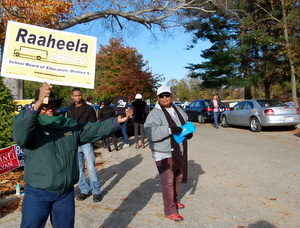 says, as she and ASASP Executive Director (and Metro Council Board Member) Doris Reed (right, in grey) work the polls in mid-afternoon at Woodmore Elementary School in Mitchellville, MD. “It’s getting to the point where if they cut any more, the whole system will come apart.” Adams sited staffing shortages across the Prince George’s County school system, “from bus drivers and mechanics to nursing and food service staff, which can be devastating, as that may be the only meal some of these kids get all day.” Getting union members involved in the political process, says Adams, “is key to letting the public know what’s going on; what’s being done – and not done – with their tax dollars.” 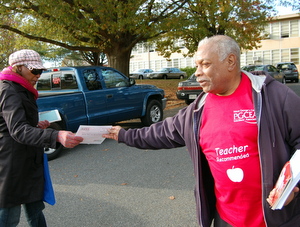 Retired music teacher John Tatum (right) does double-duty at the Kenilworth Elementary School polls in Bowie, MD. As the sun begins to set Tatum directs voters on where to park and then hands out literature on their way in to vote. 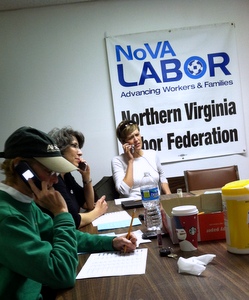 canvassers return from getting out the labor vote in Northern Virginia. Volunteers continue to call labor voters as the minutes to the 7pm poll closing continue to tick away. “Overall, we’ve probably made 40-45,000 contacts since we started in August,” Duncan says, as he tidies up the detritus of donuts and pizza devoured by more than 250 volunteers over the course of the day. “The initial enthusiasm might not have been as high as in 2008, but these last two weeks have been nothing short of phenomenal. And it wasn’t just Virginia labor volunteers,” Duncan says, “We had a ton of folks from across the river in DC and in Maryland. There’s no way we could have done this without all that help and we can’t thank everyone enough.” 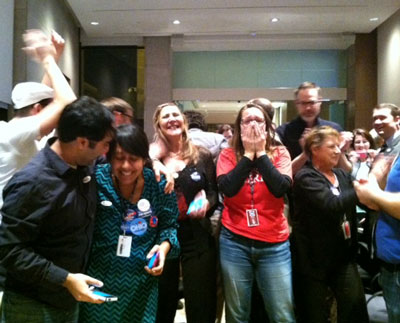 As metro-area activists gather at the AFL-CIO at the end of a long Election Day, cheering the incoming results that shortly after 11p show the re-election of President Obama, Metro Council President Jos Williams echoes Duncan, saying “solidarity doesn’t stop at the water’s edge and every single metro-area activist, volunteer, member and leader who walked, who phoned, who helped get out the labor vote, owns a piece of what we’ve accomplished together today. They should be proud of their work; I know I am.” 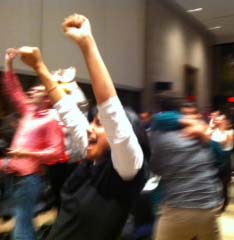