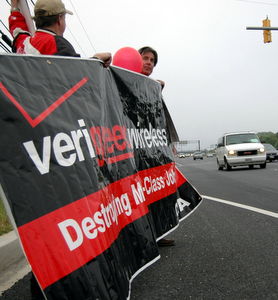 agreement with Verizon Communications that the union says “protects the job security and retirement security of 34,000 members from Virginia to Massachusetts.” “I’m so proud of our bargaining committee and members for not giving up!” CWA 2108 President Marilyn Irwin (below at center)told Union City late last night. “We owe a huge debt of gratitude to the Metro Washington Council and its affiliates and allies for attending our events and for their continued support over the past year.” The settlement came after a militant two-week strike when the old contract expired in August, 2011, and an ensuing 13 month on-the-job membership contract campaign after the strikers returned to work. Verizon and CWA had been engaged in intensive negotiations under the auspices of the Federal Mediation and Conciliation Service since July 25th. “The solidarity of CWA members and the support of our progressive allies made this contract happen,” said Ed Mooney, Vice President of CWA District 2-13, which covers 45,000 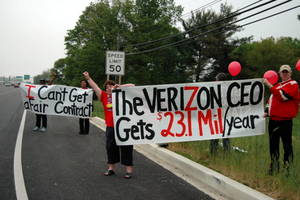 telecommunications and other CWA members from Pennsylvania to Virginia. “Verizon workers will keep their standard of living and the benefits and working conditions we’ve fought for over the years.” Highlights of the new agreement include preservation of existing job security language, including a prohibition on layoffs of workers hired before 2003 and restrictions on the company’s right to relocate work out of the region; preservation of provisions of the contract which restrict the company’s right to reassign workers long distances from their homes; preservation of the existing defined benefit pension plan for all current employees. Check out CWA 2108’s website for details on the tentative deal. – photos: CWA 2108 members at a roadside demo outside Verizon’s Silver Spring facility May 3; photos by Chris Garlock