From Union City—Travelers worldwide are being urged to avoid Hyatt hotels as Hyatt workers and their supporters launched a global “Hyatt Hurts” boycott of the hotel chain. The boycott 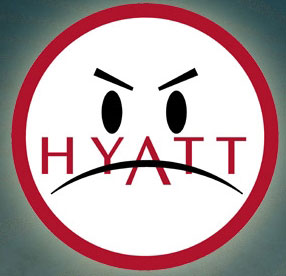 includes two Hyatt locations in the nation’s capital — the Park Hyatt and Grand Hyatt — but excludes the Hyatt Regency on Capitol Hill, where Local 25 members won a strong contract in May (“Hotel Workers Cheer In New Contract,” UC 5/3/2012). Saying that Hyatt “has singled itself out as the worst employer in the hotel industry,” Unite Here said that Hyatt abuses housekeepers and other hotel workers by replacing longtime employees with minimum wage temporary workers and imposing dangerous workloads on those who remain. “By choosing to not eat, meet or sleep at Hyatt, you send a clear message to Hyatt that its abuse and exploitation of hotel workers will not be tolerated,” said Unite Here. The boycott is being supported by a broad range of labor, community, academic and religious allies, including the AFL-CIO. Click here for the latest information on which hotels are being boycotted. – includes reporting from the UCS News Service