From Union City–
Faith, labor, and community activists gathered Mondaynight at the proposed 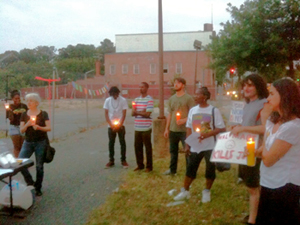 Walmart location in Ward 4 for a candlelight vigil. As the sun set, leaders shared visions for future action to protect communities from corporate interests like those of Walmart. “I live in Ward 4… my church is in Ward 4” said Plymouth Congregational Church’s Reverend Graylan Hagler, who has won community fights against other large corporations in Ward 4. “We don’t need to feel powerless all the time because we’re NOT powerless… We can not only change the city, but we can change the world if the cause is just.” Watch the video of the vigil courtesy of LiveLeek below.