Activists Look Back at 50 Years of Walmart

From Union City— The Respect DC coalition “celebrated” the 50th anniversary of the first Walmart store last week with a ‘Walmart at 50’ panel shining light on how the corporate giant has treated workers at its stores and communities it enters. “I just want to feel respected” said Michael Mensan, a Walmart associates in Laurel, MD, explaining his decision to get involved with Organization United for Respect at Walmart (OUR Walmart). OUR Walmart — a group of Walmart workers organizing for respect at stores across the country — started in nearby Laurel, MD, explained panelist and Walmart associate Bertha Guillen, saying the campaign is “alive” and spreading quickly. The discussion turned local as community members shared worries about the six Walmart stores set to enter DC in the coming years. “The store would overcome the 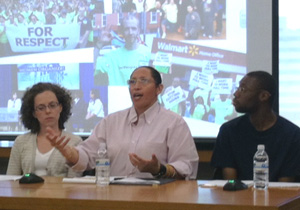 community… small businesses couldn’t survive it” said Edna Dogett of the proposed Walmart near her Ward 4 home. “This huge entity is trying to really suffocate the community and we will not stop fighting them.” Respect DC will be holding a candle light prayer vigil at the proposed Ward 4 location on July 9; check thelabor calendar for more information on upcoming Respect DC events.
– photo of Respect DC “Walmart at 50” Parade (above) by Chris Garlock; photo of panelists (left to right) Grace Sheedy (UFCW), Bertha Guillen (OUR Walmart), and Michael Mensan(OUR Walmart)