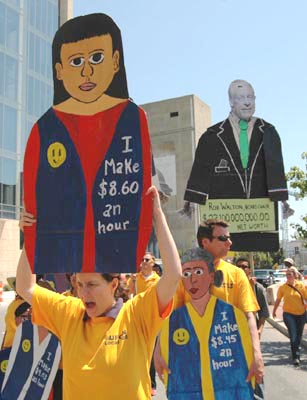 neighborhoods in postcards hailing the virtues of the retail giant entering the community.

One Ward 4 resident told Union City that the canvasser he spoke to reported being paid $15 an hour — more than most Walmart associates — to hand out the fliers, while another resident’s blog raised the question of whether Walmart’s canvassing could be a sign “that the company still feels it’s necessary to try to assuage community opposition to their projects” (Why is Walmart still distributing promotional materials asking for support from District residents?, The Brightwoodian 6/3/2012).

In April of this year Walmart announced they would delay opening any of the DC stores until late 2013 (Walmart Delay in DC Shows Lack of Support, Says Community Group, UC 4/9/2012) and use the interim time to “further engage with the neighborhoods that surround our stores and build even more support for Walmart.”

“It is abundantly clear that Walmart’s priorities are misplaced” said DC Jobs with Justice Executive Director Nikki Daruwala. “This is yet another example of Walmart caring more about image and profit than the real needs of their associates and members of the community where they plan to build.”