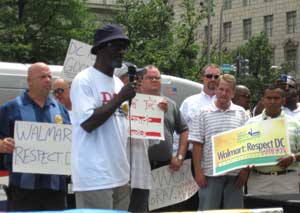 community groups and residents, saying that Gray had failed to deliver the promised CBA, had taken their demands to the DC City Council. Members of the Respect DC campaign, who have been demanding a citywide Community Benefits Agreement (CBA) with Walmart, have been frustrated by the lack of information in the Mayor’s negotiations with Walmart. “If they really are close to a CBA, they haven’t communicated that to members of our coalition, community members near the sites, or any of the Councilmembers we’ve talked to,” said Respect DC’s Mike Wilson. “The community needs to know when the CBA is projected to be finished and what’s in it.” Councilmembers Muriel Bowser (D, Ward 4) and Yvette Alexander (D, Ward 7) both said during public meetings over the summer that plans for the sites would not move forward without a signed CBA. But in the meantime, Large Tract Reviews were approved by the Office of Planning at both the Bladensburg Road and Georgia Avenue sites. And two weeks ago, developer Foulger-Pratt

began demolition at the Georgia Avenue site and signed a lease with Walmart. Over the summer members of the Respect DC coalition attended many of the Mayor’s public appearances to remind him of the urgency of the issue. “The Mayor’s response was always that the CBA was being worked on,” Wilson said, “but the community can’t keep waiting now that a lease has been signed.” The coalition plans to keep engaged with both the Mayor and DC Council to ensure that no Walmart store opens without an enforceable CBA. “We’re encouraged to hear that the Mayor is close to a CBA,” said Metro Washington Council President Jos Williams. “However, it’s urgent that the agreement be finalized before any more leases are signed, and we won’t be satisfied unless the agreement is enforceable.” photo: at a June Respect DC demo at the Wilson Building; photo by Lillian Walker Shelton