Solidarity with CWA and IBEW Workers at Verizon

Verizon Strikers: “No Contract, No Peace!”
On Tuesday, red-clad picketers marched outside the Verizon 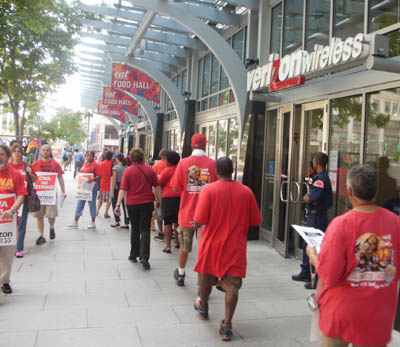 Wireless store on F Street, NW in Washington, DC to urge Verizon to settle a fair contract that will give workers more benefits instead of taking them away. Almost 45,000 workers are on strike throughout the New England and Mid-Atlantic regions of the United States. The workers on strike include field technicians, service representatives, operators and other support personal.  Many of these workers would lose their sick days, paid vacation time, holidays, childcare and pensions if Verizon gets its demands. Meanwhile Verizon’s has booked $6 billion in profits while paying top executives $258 million over the past four years. The Communications Workers of America (CWA) and Electrical Workers (IBEW) have been bargaining with Verizon since June and struck on Sunday after the contract expired. Verizon had cancelled bargaining sessions scheduled for Saturday night, Sunday morning and Sunday afternoon. CWA and Verizon returned to the table Monday and bargained late into the night. “Unions are contacting us from all over the country who are offering to help us in our fight against Verizon,” says CWA District 2. “Working men and women, union and non-union, realize this is a fight to save the middle class.” While contract negotiations continue, striking Verizon workers are walking picketlines throughout the Metro Washington area. (click here to find one near you). The Metro Council’s Community Services Agency is collecting contributions of non-perishable food, gift cards and funds earmarked for Verizon strikers; emailkmckirch@dclabor.org. Watch the Council website for updates on the strike and picketlines.

UFCW Local 400 stands in solidarity with fellow brothers and sisters at CWA Local 13000.