From Union City– Adding financial insult to economic injury, federal workers may be forced to contribute more to their own pensions at the same time 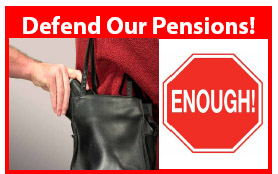 their wages have been frozen. Federal pensions have become an easy political target for lawmakers on both sides of the aisle looking to score points with voters reeling from the ongoing recession. Last December, President’s Obama’s fiscal commission recommended hitting up federal employees for larger contributions to their own pensions – another de-facto pay cut of as much as 5 percent on top of the current 2-year wage freeze. In March, meanwhile, Republican Senators Richard Burr and Tom Coburn proposed completely eliminating pensions for government employees. Last week AFSCME Council 26 wrote letters to Washington-area Senators and Representatives urging them not to raise the workers’ retirement contribution. Council 26 Executive Director Carl Goldman said “I urge all federal employees and other Union City readers to call Congress on this issue. While major corporations pay no taxes, it is outrageous that Congress and the Administration are attacking workers’ living conditions.”
– includes reporting by the UCS News Service