From Union City–Truck drivers at Giant Food, represented by Teamsters Local 639, voted on Wednesday to endorse a new four-year contract by a 159 to 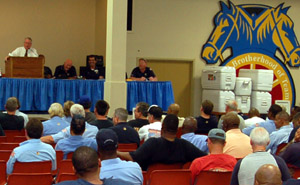 1 margin. The agreement, which covers nearly 200 drivers, maintains contract language that keeps the driving jobs in the Washington, DC area. “The work can not be outsourced. We are keeping good paying union jobs in this area,” noted chief negotiator Phil Giles. “The committee remained unified and the rank and file members were active building support in the community (Local Giant Workers Take Fight For Jobs To Amsterdam, 4/25 Union City). This was our formula for winning a fair contract.” The drivers ferry goods in a 125 mile radius from the Giant warehouse in Jessup, MD. They service over 170 Giant stores in the District, Maryland, Virginia and Delaware. – reported  by Roger Newell; photo courtesy IBT