From Union City–-THIS IS (NOT) WHAT DEMOCRACY LOOKS LIKE: In case you need another reason to attend today’s demo (5P, 601 13th St., N.W. near 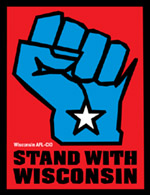 G Street, Metro Center) at the Wisconsin GOP fundraiser, consider that Wisconsin Sen. Majority Leader Scott Fitzgerald said Monday that the votes of state Senate Democrats won’t count, proving once again that Wisconsin Senate Republicans don’t believe in democracy. Fitzgerald and the rest of the GOP gang in the Wisconsin Senate and Assembly are coming to D.C. tonight to collect their payoff from corporate lobbyists after they voted last week in the dark of night to strip teachers, nurses, snowplow drivers and others of their collective bargaining rights. Local activists will demonstrate at the fundraiser from 5P-7P at 601 13th Street NW.