In a huge display of solidarity and political clout, public workers from across Maryland and 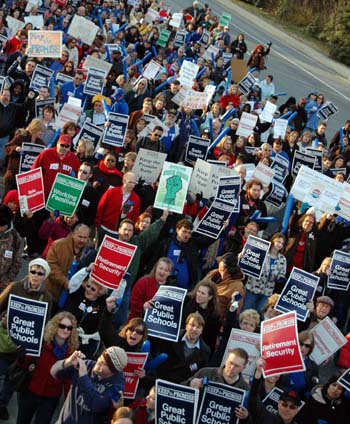 metro Washington staged a massive march and rally Monday night in Annapolis to protect pensions and funding for public schools.

After massing at the Navy-Marine Corps Memorial Stadium, thousands of teachers, government workers and other public employees and their allies – as many as 15,000 by some estimates — marched nearly a mile to the State House, clanging bells and banging bright blue plastic thunder sticks as they chanted “Keep the promise!” and “Enough is enough!”

John Whittiac accompanied his wife, a teacher in Carroll County, who’s “about to retire,” and worried about “whether the state will keep the promises they made” to provide a pension, Whittiac told Union City as he marched down Bladen 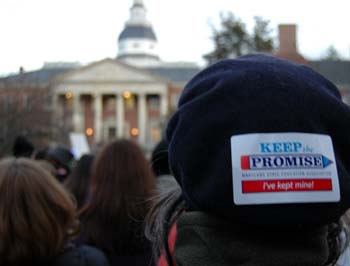 Street. “This is not just about state employees, it’s about all workers,” said Les Bayless, an SEIU 32BJ retiree. “Wisconsin woke everybody up to what’s going on around the country and this is fantastic to see so many thousands of people out here today.

“It’s the best and largest rally we’ve had in years,” said 20-year special education teacher Terry Jefferson, a member of AFSCME Maryland, which spearheaded the event with the Maryland State Education Association. “The way things are going, I don’t even know what my future looks like.”

IBEW 26’s Larry Greenhill Sr., standing amid the huge crowd thronging Lawyer’s Mall, said he was there “to support Maryland’s public workers” and to protest the state’s attempt “to balance the budget on the backs of their workers.” Added Earl Beatty of ATU 689, “we have to support workers not only here, but in states across the country. This is the time when we all need to get out and fight for what’s right.”