From Union City—
Over 2,000 striking nurses and their supporters massed outside Washington Hospital Center at 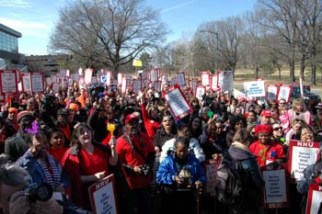 noon Friday in a strong show of support for the nurses’ one-day strike. “Your strike today is powerful,” said AFL-CIO President Richard Trumka. “It’s like what our brothers and sisters are doing across the Midwest and in cities and towns nationwide. They’re standing up to the corporate CEO agenda that’s bent on beating down America, on trampling on our middle class and on turning us into a nation of haves and have-nots.” Click here for the complete report, with the voices of nurses Vanessa and Tiera, ATU 689’s Jackie Jeter, UFCW 1994’s David Owens, Chuck Clay of IATSE 22, NOVA Labor’s Dan Duncan, and Teamsters 639’s John Gibson. – report/photos by Chris Garlock and Adam Wright