From Union City—Governors from across th 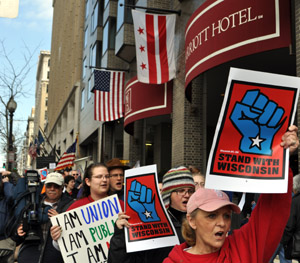 e country got a loud and clear message of worker solidarity Sunday morning as well over a thousand activists noisily demon-strated their support for Wisconsin workers outside the annual conference of the National Governor’s Association in downtown DC. Chanting “Kill the bill!” and “What’s disgusting? Union busting!” the demonstrators filled the sidewalk on 14th Street outside the JW Marriott. Wisconsin Governor Scott Walker had been scheduled to chair a panel at the conference but had canceled his appearance at the last minute. The demonstration was part of a weekend of mobilization across the country as the spontaneous reaction to attacks on worker rights continued to spread. “Not all governors are the same,” said Vermont Governor Peter Shumlin (below, center) in an impromptu appearance at Sunday’s demonstration. “You are the backbone of America. You didn’t create the crisis, it was the g 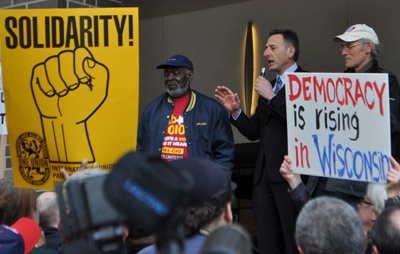 reed on Wall Street.” Shumlin said he’s urged Walker to negotiate with workers, noting that “In Vermont, we know that we get more with maple syrup than we do with vinegar.”“Everyone has the right to join trade unions for the protection of his interest” said Metro Council President Jos Williams at the conclusion of the demonstration, quoting the US-ratified United Nations’ Universal Declaration of Human Rights. “That’s why we’re here today; to ensure that these governors are true to what our country stands for.” – Chris Garlock; photos by Adam Wright