Rally in DC to support public sector workers from UFCW Local 400 on Vimeo.

From the Union City: Hundreds of DC-area workers, students, community and religious allies are expected to demonstr 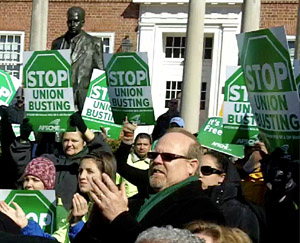 ate support for embattled Wisconsin state workers today at 12:30 p.m. outsideWisconsin’s DC state offices near the U.S. Capitol. A similar demo was held Tuesday in Annapolis and is part of a national wave of protest and solidarity actions spontaneously springing up around the country as workers fight for their collective bargaining rights. An estimated 500 area workers, students and labor allies jammed Lawyer’s Mall outside the Maryland State Capitol building in Annapolis at noon yesterday, waving signs decrying union-busting and rallying in solidarity with workers in Wisconsin whose collective bargaining rights are under attack from state legislators. “Union rights are civil and human rights,” Maryland State and District of Columbia AFL-CIO Secretary-Treasurer Donna Edwards told Union City. “When dictators come to power, the first thing the usually do is launch an assault on union rights because that is where true democracy grows. We will not tolerate these attacks!”  (Photo by Karlyn Williams)